Third up in the Meet the Mentor series is Jenna Ahn, co-founder and CEO of Millie.

Jenna grew up in Changwon, a small town in South Korea, setting her sights on international adventures at the age of just eight.

With wild determination, she made her way from Korea to the US, to the UK, and then back to the US again, where she founded Millie with Giuseppe Iademarco and Ariel Lau.

Like all of the Millie founding team, she has a very interesting backstory – here’s what she had to say when we interviewed her.

It’s your turn now, Jenna! Can you set the scene for us, starting with what life was like growing up in South Korea?

Sure! I grew up in a very normal Korean household. My parents didn’t speak any English, and had never lived abroad. So I’m not sure why or how I decided that Korea was too small for me at eight years’ old. I became obsessed with the idea of studying in the US; so much so that I called up US schools and got them to send me brochures, which I later found out my dad had hidden from me.

"My parents didn’t speak any English, and had never lived abroad. So I’m not sure why or how I decided that Korea was too small for me at eight years’ old."

Why do you think your dad hid them from you? How did you win him over?

Over 90% of Korean international students are from Seoul, the capital, and have very wealthy families to support them. Because my family and I didn’t fit into that picture, I think my dad didn’t really see any way of that dream coming true.

He actually created this game, where he kept setting me harder and harder goals to achieve. He’d say, ‘if you succeed in doing this, I’ll consider sending you to the US’. I think he hoped I’d give up, but I rose to every challenge he set. I was so incredibly determined to go, I remember even at one point I created a seven-page proposal with a project plan on how I could get into Stanford University, which I ended up not even applying to, but he was powerless to resist, really!

Sounds like it! So, eventually you did make it to the US?

I did! I first came to the US for a short stay when I was 13, and it just increased my desire to go there more permanently – which I managed to do when I was 17. In my teenage years, I lived with 3-4 different families and switched between a boarding school, a public school, and a private catholic school almost every year. I was very independent already, so I adapted pretty quickly. I’d also been a regional champion swimmer in Korea, so I was able to join the varsity team, which was a great way to make friends and integrate – especially in the US where there is a big emphasis on sports.

"This was when I accepted I wasn’t culturally completely Korean anymore, but nor was I ever going to be completely American."

How was the transition from US high school to US college? You got into Cornell, right?

Yes. It was a bit of a culture shock honestly, but not for the reasons you might expect. I’d spent a few years acclimatizing to US culture at this point and sort of thought I wanted to be “American”. At the New Jersey high schools I attended, I was the only Asian, so fully embracing American culture was really the only option if I wanted to fit in. Whereas at Cornell there were such a diverse set of people, including a lot of Asian students. This was when that ‘third-culture kid’ experience became apparent and I had to accept I wasn’t culturally completely Korean anymore, but nor was I ever going to be completely American.

And what about academically? What did you study at Cornell and how did it go?

I always thought I wanted to study business, but a classmate of mine from AP Physics once told me that it’s better to get fundamental knowledge on a specific subject, and then you can more easily learn the business side of things later.

This made a lot of sense, so I changed all my applications from business to engineering a month before the application deadline in my senior year. That’s when I found the Operations Research and Information Engineering (ORIE) major at Cornell, which is considered by many a direct precursor to data science and analytics – the field in which I kicked off my career a few years later.

The discipline was anchored around optimizing business, with a focus on quantitatively solving problems rather than just general theory. It was the perfect subject for someone like me who wanted to nurture my entrepreneurial side, while balancing it with something as tangible as engineering. A good example of what we studied is airlines. If you imagine how big the industry is, and all the moving parts, you can use data to find very tiny areas to improve that can change profits dramatically. I found the whole thing challenging, but fascinating.

Earlier you said you weren’t a typical Korean international student from a wealthy background. How did you manage financially at Cornell?

It was extremely hard. As an international student, even though I’d lived in the US for a few years, I was not eligible for any scholarship or subsidies. This meant having to work, which was frustrating because I felt like I was missing out on the social side of things. Furthermore, the engineering classes were so demanding academically that my grades suffered.

That being said, funding myself independently was one of the things I’m most proud of. I did this by teaching SAT prep as soon as I graduated from high school – even lying about my age to do so. I made good money doing it, and with some support from my family I kept afloat for the first two years. But as I approached my third year, I needed $150k in tuition and accommodation for the final two years which I just didn’t have.

My choices were to drop out, transfer to another school, or find a way of making it happen. I refused to give up, because I had such a strong sense this was where I was meant to be and I’d fought so hard to get there. I moved back to Korea and set up my own consultancy that helped students with SAT prep and applications into colleges abroad – in many ways Millie’s predecessor. After two years and a lot of hard work, I had all the money I needed and could go back and finish my degree.

Sounds like a lot of hard work. You must have been so relieved when you graduated. What came next?

Absolutely. After graduating, I really wanted to live in New York and do something related to my major, and ended up starting my career in data science at AIG, a Fortune 100 insurance company. There I was really at the forefront of innovation, as data science was relatively unknown back then. I was working with an amazing set of people and spent five great years there.

When I was ready to move on, I joined the Data Analytics team at JP Morgan. I was there for over two years, working in both New York and London. While there I realized I wanted to study for an MBA, and JP Morgan graciously supported my decision and sponsored it for me. 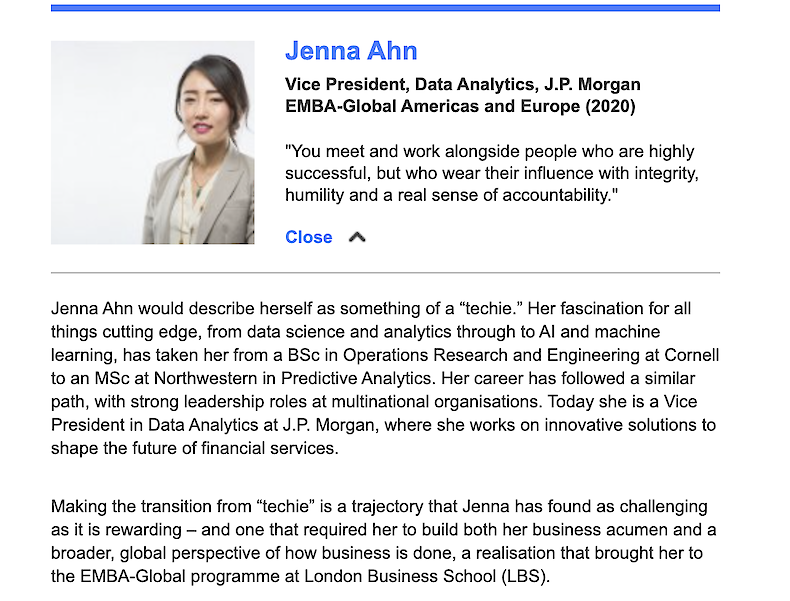 What do you think made you want to keep studying?

Back then, I wasn’t as proud as I am now of having funded my own way through college. So even after graduating I felt like I was still playing catch up. I actually did a masters in Data Science from Northwestern while at AIG partly for this reason; so many of my classmates had already a higher education degree under their belt and – even though I was already in a great job – I didn’t want to feel like I was still one step behind them.

My motivation for an MBA was a bit more than that. At that point, I was eight years into my career and, while clearly not at the peak of it, I could already see the very linear progression in front of me. The clearer that vision became, the more seriously I wanted to do something that would empower me to take a more entrepreneurial direction and do something a bit different.

How was the EMBA program at Columbia?

It was really interesting. The Global EMBA program at Columbia runs jointly with London Business School, so there is a real international focus, something that’s always been important to me. This was why I was able to meet Giuseppe – Millie’s COO – who was based in New York, while I was based in London.

The fact that the course focused on a lot of self-reflection and working out our values was particularly useful, as it allowed Giuseppe and I to realize that we really wanted the same thing from a business, despite neither of us having an exact idea on what that might look like. What we both wanted was to build something global, with likeminded people, that had a real social impact.

And how did those ideas actually turn into Millie?

After a lot of discussions between Giuseppe and me, things started coming together. We both had similar experiences of studying abroad without much guidance, I’d had experience of running my own consultancy back when I needed to fund my final years at Cornell, and I’d also been talking over the years with Ariel – Millie’s Head Counsellor – about how ripe the education sector was for disruption. When we added all of our experiences and insights, alongside what Giuseppe and I had learned on the EMBA program, Millie just organically began to take shape.

Last question for you. What advice would you give to your high school self?

I’d start with my favorite quote from a poem by Erin Hanson:

“Oh but my darling, what if you fly?”

It’s such an important reminder for just trying. You can’t succeed at every single thing you try, at least not the first time. But whenever you’re in doubt that something’s not going to work, remind yourself of what could happen if you succeed.

The second piece of advice I’d give is do everything in your power to influence something you want, and see how it works out. My example of this is getting JP Morgan to support my decision to pursue an MBA. I did absolutely everything I could do before asking for it: I’d researched the programs I wanted, taken my GMAT, and gotten into the most prestigious MBA programs in Europe before presenting to my manager on why they should consider it.

My theory is that if you’re investing time in doing something fundamentally important to you, then that time is never wasted – even if you don’t initially get the results you were looking for, you never know where your determination might take you.

What if you fly?

"It’s such an important reminder for just trying. Whenever you’re in doubt that something’s not going to work, remind yourself of what could happen if you succeed."