Coming up second in the Meet the Mentor series is Ariel Lau, co-founder and Head of Counselling at Millie.

Ariel’s journey takes her from an ambitious high school student in Hong Kong, to studying at Cornell university on a full scholarship, to co-founding a successful global start-up.

Here’s what she had to say when we had a chat with her.

Hi Ariel! Let’s rewind back to high school for a second. How was that for you?

Well I was born and raised in Hong Kong and started out in the local high school system. The local way is very much focused on passing exams and rigidly sticking to a syllabus. Culturally, asking or answering questions in class is perceived weirdly by your classmates, so the lessons mainly consist of a teacher talking to everyone. I remember in one lesson a teacher threatened that if no one answered his question, we’d all have to write an essay – and still no one said anything.

For someone like me, who was just innately curious about everything, passing exams with good grades wasn’t enough. Very early on I got a sense that a more engaging, more holistic way of learning was available – I just wasn’t sure where.

My mom knew that I wasn’t completely happy, and it just so happened that she was really good friends with the school janitor. He knew of a few students who had gone to Li Po Chun United World College of Hong Kong and recommended it to her. The school followed a more international system of learning, and my mum and I agreed it was the perfect fit for me.

"For someone like me, who was innately curious about everything, passing exams with good grades wasn’t enough."

So on that chance conversation you ended up moving to Li Po Chun United World College of Hong Kong. How did it compare?

It really couldn’t have been more different. It was a boarding school for one, so I suddenly had to become independent very quickly. And then there was the diversity of my classmates – they were from the Middle East, Africa, South Asia...everywhere! It was a cultural education as much as an academic one.

After five years of being silent in a class, it was very strange adjusting to an environment where active participation actually affected my grade. It definitely took some getting used to, but the more international curriculum really set me up for success when I applied to study in the US.

Why did you decide on studying in the US? What did you do?

I was a bit torn between the UK and the US, but I settled on the States as the courses are so flexible there. Especially after my experiences in Hong Kong, I really wanted the ability to tailor a course around my interests, and not on a rigid syllabus.

I was lucky enough to get a full scholarship to Cornell university, where initially I started out majoring in urban planning. I started to realize that the course content was very US-centric, which didn’t correlate with the fact I knew I wanted to go back to Hong Kong to work after I graduated. But thanks to the US liberal arts system’s flexibility, I was easily able to change majors and gained a lot of soft skills in the process too. If I had decided to study in the UK, where it’s much harder to switch courses, I just don’t think I would have come out so well-rounded.

Anyway, I decided to move to the BSc of Hotel Administration course, as it was more global and business-focused, and therefore more transferable back home. I was really interested in food and beverages, so I focused on that for the rest of my time at Cornell.

How was life after graduating? What did you do when you moved back to Hong Kong?

This period of my life was probably the most challenging. Straight out of college I joined the JW Marriott food & beverage management traineeship, because of what I’d studied and enjoyed at college. However, it felt in a lot of ways like I was back at a local Hong Kong high school – hotel culture in Hong Kong is very traditional, and built on hierarchy.
As a fast-tracked candidate who was getting promoted very quickly, I did not really fit in at all. And actually the environment became quite hostile. I left after just three months when I realized that I could never thrive somewhere that was so unnurturing.

That sounds tough. What did you do next?

I spent six months doing a bit of soul-searching and applying to a few other management trainee programs, which I supposed was the route I was meant to take. I received offers from some good ones like CBRE, but my experience at JW Marriott really made me wary of going back into a corporate environment.

It was then that a role as a university counsellor at CKY School caught my eye. With my experience of applying to schools in Hong Kong, the US, and the UK, I felt like I could really play a valuable part in guiding students through the life-changing university application process. When I thought about the minimal support I had when applying to US colleges as a high school senior, I knew that helping students through this would be both personally and professionally fulfilling.

"With my experience of applying to schools in Hong Kong, the US, and the UK, I felt like I could really play a valuable part in guiding students through the life-changing university application process."

One of the key challenges for a counsellor is when students want one thing and parents want another. Marrying those two wants together is not easy, but being able to do it is what makes a good counsellor. I loved the challenge as soon as I got started, and before I knew it I realized I was pretty good at it.

The school itself was the perfect place to begin my career as a counsellor, as it had an amazing principal. She was not your typical character – she had short hair, wore tracksuits, and knew every single student by name. She created a very nurturing environment, and taught me the power I had to transform the trajectories of the kids who were not achieving their full potential. Working on those transformational cases is something I’ve never got tired of, and heavily influenced what I wanted to create at Millie.

After a few years, I knew I needed experience at another school. When I was approached by my old high school Li Po Chun United World College to join them as their first counsellor, I jumped at the opportunity.

"Working on those transformational cases is something I’ve never got tired of, and heavily influenced what I wanted to create at Millie."

In her spare time, Ariel likes cultural activities such as going to Broadway musicals and concerts, and busking (see above!)

So you then went back to literally where you first started. How did that compare to your other experience?

Well it greatly broadened my knowledge of university applications outside of the UK and US, as many students there wanted to study all over Europe and Africa. At CKY most students who wanted to study abroad would apply mainly to the UK, so it was interesting to learn more about the unique application processes to other countries around the world.

Otherwise, it was a bit challenging to adapt. At CKY there were 70 students and three counsellors in quite an established department. When I moved to United Work College there were 120 students and just me – their first ever full-time university counsellor. It was insanely busy and I ended up burning out quite quickly.

How did you go from university counselling to co-founding Millie?

Despite the burn out, my time at Li Po Chun United World College was one of my most important roles, as it really started to crystallize the idea for Millie. I knew that internal counselling functions could only achieve so much, and that I could help more students if I had more resources.

I’d known Jenna for years, through a mutual friend at Cornell. We’d spoken a lot about how keen we were to make learning more fun, and more engaging, based on our own experiences. And we’d regularly reflect on how weird it was that no disruption whatsoever seemed to be happening in the education sector, despite how important it was.
In 2019, Jenna introduced me to Giuseppe, who she’d met while studying for her EMBA at Columbia. He was on the hunt for some co-founders for a business, and we had a collective ‘a-ha’ moment when we realized our shared knowledge, experience, and values could all be combined into a community-spirited education business. Millie’s co-founding team was born!

So that’s how you got where you are today! A final question for you: what advice would you give to your high school self?

Learn to say no. Being nice and building relationships is important, but so is remembering that you can never please everyone. Be kind to yourself, prioritize your needs, and always fight for what you know is right. It’s not easy, but the sooner you learn that the happier and more successful you’ll be.

"Learn to say no. Be kind to yourself, prioritize your needs, and always fight for what you know is right." 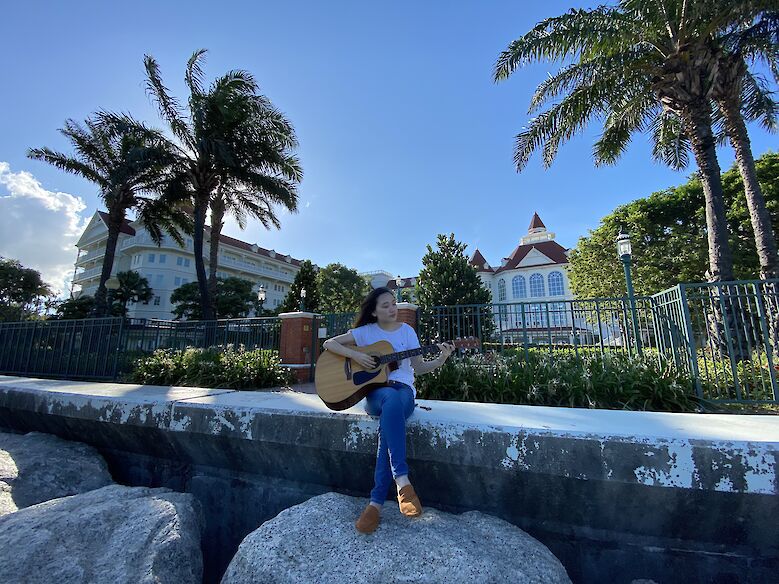